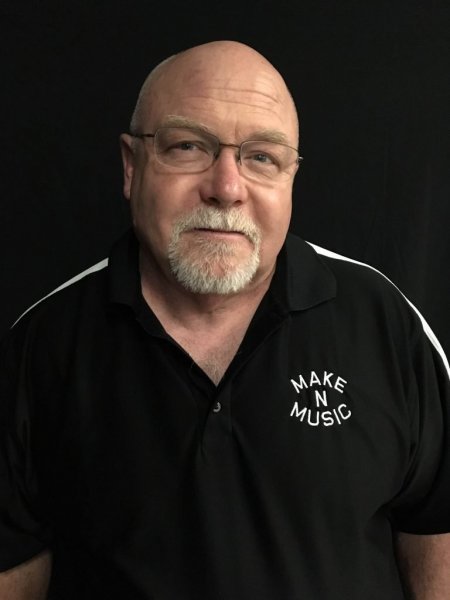 Rick LaFever-Store Manager
Rick's first exposure to music was as an infant, his parents were in a band in the late '40s & early '50s, playing "hillbilly" music. His father played guitar and lap steel and his mother played upright bass, which was twice her size. His earliest  memories  are of being  2 or 3 years old, sitting on the guitar player's lap, mesmerized and watching his hands make all those sounds.
His first guitar was a $19.95 Silvertone and he was about 8 or 9 years old when he got it, today he has been playing 52 years! Rick has been in bands since the age of 14 and has played Rock ,Country and Blues. His musical retail experience began in 1976 when he made the decision to also work at something he enjoyed. He applied at Giant Music in Falls Church, VA, where he had bought his first electric guitar and amp, as well as a 1970 "Hendrix at Woodstock" Strat.  At that time, Giant had three locations and he was placed at the least busy store, but within 2 months, Rick was promoted to the most busy location and became top sales person, and then Manager.
Rick also always had a knack (or obsession) for taking things apart to "fix" them, and that had carried over to his guitars and amps. While working at Giant Music, he had the privilege of learning how to "fix" things correctly from John Vetter, a brilliant guy who seemed to know everything, including how to impart his knowledge and methodology as they relate to instrument and amp repair.
In 1976, Rick went on to be trained at the Peavey factory in Meridian MS, subjects covered included, signal flow, polarity impedance matching, manufacturing techniques for electronics, speakers guitars/basses and cabinetry. He has been an authorized Peavey Tech for over 23 years and a Fender Repair Tech since 1987. He has also attended the Taylor Guitar University on-campus factory training and has been an authorized Taylor Service Tech for more than 15 years. Rick says, "As a repair person, I take pride in doing the job right and being fair and honest with the customer. Trust is a powerful asset and very important to me."
Rick has been with MAKE 'N' MUSIC since 1986 as Store Manager and trust is what he strives for in sales as well. His goal is to develop the trust and confidence of every person who enters the store, whether they need advice on strings or recommendations and support on major purchases ranging from guitars, amps or elaborate sound systems.
"Selling and servicing at MAKE 'N' MUSIC is not just my job, it's my life!" ~Rick LaFever 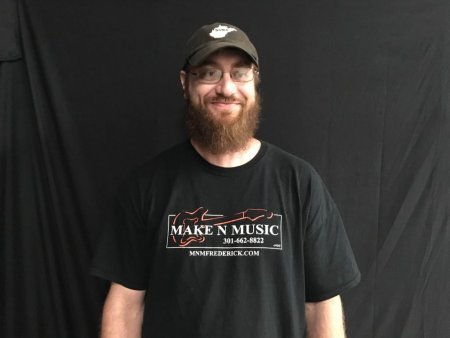 Bill Unger-Sales
Bill's passion for music started at a young age; he grew up in a house where the radio was always on, with the only disruption coming from a  power outage. He is a self described "gear head" who tries to soak up as much knowledge as possible when it comes to the tools of music. He has experience teaching bass and guitar as well as recording classes and presenting clinics on how to get the most our of your gear.
Bill has been playing bass for over 25 years and has played gigs up and down the east coast from Florida to Canada. In addition to bass, he also plays guitar, drums, saxaphone and just about anything with strings. Bill also has over 20 years experience as a live sound engineer, recording engineer and producer. Providing live sound support for every style of music, working with every level of gear, at any type of venue, he has supported every style of music from up-and-coming acts to national touring acts, such as,  Miss WV , Grammy winner, Dr. John, and the Smithsonian. His work can be heard nationally and internationally.
Not only is Bill a very talented musician and sound engineer, he also does repair of guitars, PA, amps and most music gear and instruments, he has also helped to design sound systems of all sizes for schools, restaurants, churches, bars, home, movie theaters & concert venues.
Bill has worked with MAKE 'N' MUSIC for over 10 years, and is pretty well known as the "answer man" when it comes to gear questions. Don't be shy to ask this guy, because if its about bass, guitars, amps, sound or anything else, he can and will help you! 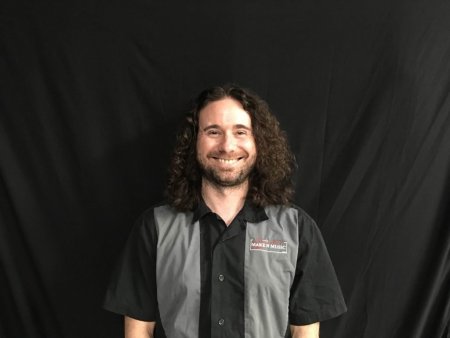 Wally Worsley-Sales
Wally was born out of music, both of his parents, music majors, who went on to teaching. It was inevitable that Wally would catch the music bug. Although born in Frederick, Wally and his brother grew up with their father in Virginia, then moving to Charlottesville as teenagers. It was in Charlottesville that Wally and his brother began their musical careers, performing in a band together throughout high school and long after. At age 21, Wally began working at a local music shop, Charlottesville Music, gaining 10 years music retail experience. As a musician, Wally has also toured with the band 12 Stones from  Louisiana & since moving back to Frederick in 2010, continues to perform his own music as Wally Worsely. He is excited to have joined the Make 'N" Music team and looks forward to sharing his expertise with their customers!